“I know this transformation is painful, but you’re not falling apart; you’re just falling into something different, with a new capacity to be beautiful.” – William C. Hannan

I couldn’t exactly pinpoint a memory when I’ve started joining organisations outside the usual daily confines of life – house, school and work. I’ve always been part of student councils, church ministries and youth organisations. A jam-packed weekend of church duties and extracurricular activities was a normal weekend for me. Hence, as I grew older, my volunteering pursuit continued. It even reached a point when I joined a sorority in college. Then, I came across the world of Rotaract. And my life was never the same ever since. 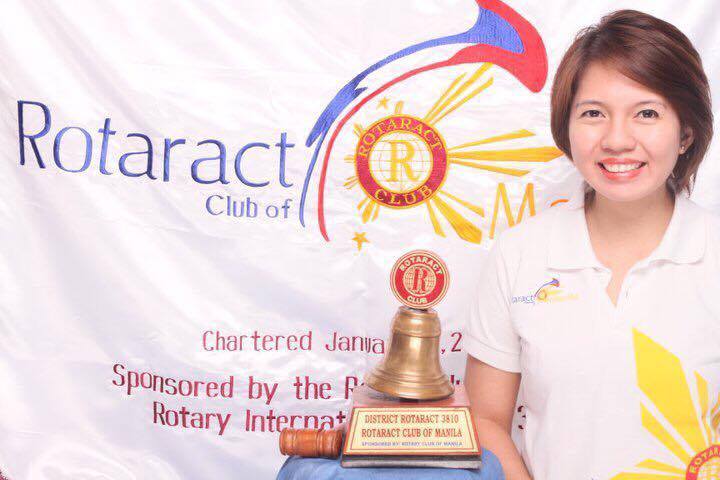 When I was invited by a friend to join Rotaract in 2009, I didn’t pass up the opportunity. Guided by the values and ideals of Rotary, a global organisation, I knew I made the right choice to join and be involved. The avenues of community service, club service, professional development and international service all made sense in order to mold well-rounded global citizens. I started out as a member, took part in projects and eventually found my way to become an International Service Director, a Vice-President, and finally as a club President of the country’s premier Rotaract club, Rotaract Club of Manila.

If one decides to become an active member of any organisation, one makes the commitment to show up, to do what’s required and to deliver what’s expected. More so if one is given the responsibility to lead. In 2012, I was given the enormous challenge to not just lead the club but to bring it to greater heights and maintain the reputation that the club has been known for. However, along the way, I got lost and made the fatal mistake of not sucking things up. I failed not just the club, but I failed myself ultimately.

While I was wearing several BIG hats all at the same time, I realised later on that I could only juggle as much. I held on strongly to my personal conviction that you couldn’t give what you do not have. And at that time, I was clueless about where life would take me. I even desperately reached the decision of grabbing an opportunity overseas in the hopes that it would redeem me and fill the gaping hole within. I learned that running away from problems does not solve the problem. It makes things even worse, and the ugly part of it all is that the pain and nothingness you’re trying to run away from will always have a way of haunting you and catching up on you later on.

I believed in long-term engagement when it comes to helping a hand. Everytime we’d finish a service project on a weekend, I would always ask myself, ‘is this all?’ Our yearly activity line-ups were filled with projects here and there, but I was constantly questioning myself if in the end, people in need do benefit from what we do, or is it the other way around? Were we the ones benefitting after all in terms of public exposure that people see and notice our acts of doing good in this world? I wasn’t much a fan of using your right hand to help out, and letting the other hand know what you’re doing. But then again, I lost my ability to believe in the idea that small, repetitive acts can actually do a great deal of goodness in this world. I failed to understand on a deeper level why projects had to be documented. Essentially, there is always a reason why things are structured the way they are, especially for organisations which last and thrive for centuries, 112 years to be exact for Rotary.

Politics was everywhere. Some would even go as far as kissing someone’s a** in order to get ahead or steal the limelight. I am easily repulsed even at the smallest faint of playing politics. They say that you either stay and become part of the system or get out. Instead of channelling my position to influence and change what I thought was wrong, I fatally made the mistake of getting out. There I was once again, failing to acknowledge that politics is present wherever you go, that I should’ve made good use of honing the skill of getting along with difficult people and turning adversaries into productive fellows.

‘Nasaan ang Pangulo?’ — It’s a common question asked about our country’s chief executive, especially if a president goes missing at times when the country needs him most. For sure, my fellow club members and officers have asked the same question when my life went haywire and I decided to go back inside my shell. I learned that no matter the circumstances, whatever state you’re in, a leader always shows up and never leaves his members behind. And no matter what, you always finish what you’ve committed to at the beginning. No matter how messy things become in the middle, you need to have the grit and the courage to press on and persist. You don’t stop when things get difficult, you stop when things are done. Broken promises. Unfulfilled obligations. Forgotten responsibilities. Not just to Rotaract, but to all the organisations I’ve decided to leave on a whim. I’ve made immature and irresponsible decisions, yes. But should this stop me from starting over again? No.

It’s been a long while that I’ve distanced myself and decided to stay silent. But I guess I would give great injustice to this great organisation and to friends I’ve gained along the way if I don’t open up and share the lessons that I learned the hard way. There’s just a lot of important lessons about life I wouldn’t have learned if things did not fall apart. I wouldn’t have tapped into this immense treasure trove about forgiving one’s self and others, of second chances and the amount of grace and healing that’s available in order to repair what’s broken.

Last Sunday, I strongly fought my insecurities and fear of failing people once again, by volunteering to read during the Mass. Karlo said that my voice was trembling at the beginning of my reading, a very unusual occurrence for someone who’s been used to reading in front of a crowd. I guess I’ve been scared all this time and lost faith in myself that I can still become a better and stronger person.

Slowly but surely, I’m deciding to come out of my shell, ready to contribute in whatever way I can to the world. But this time, I’ll persist. If there’s anything which grace has taught me in defeat, it’s to remain steadfast and brave in each journey. Thank you Rotaract for the lessons, I guess now, once again, I’m ready.

“We are afflicted in every way, but not constrained; perplexed, but not driven to despair; persecuted, but not abandoned; struck down, but not destroyed.” – 2 Corinthians 4:8-9